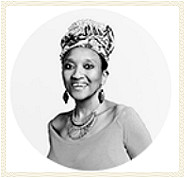 Vuyo Koyana leads The Pan African Market which is a community made up of a diverse mix of continental practitioners across various entrepreneurial and  creative fields. She is a full time People Development Consultant within Pan African Market Consulting. She sits on some boards in the Business and Art sectors and is committed to promoting activities that empower through personal experience and learning thus ensuring enduring growth and development for both the individual and the initiative. As a traditional healer, Vuyo believes that a continued exploration of ourselves, our foundations and our ways with those co-travelling with us is what brings us closer to our highest beauty and the ultimate magic of life. She is convinced that our humanity is what will get us out of life alive!

Born, raised and fundamentally educated in the Eastern Cape, in Umtata, I currently operate nationally, in South Africa as well as in neighbouring countries in the rest of Africa and have, for the last 10 years. I enjoy a single, healthy and inspired life, in the privileged presence of an extended family often doubling as best friends, dependants and or guardians.

Matriculated at Umtata High School, I proceeded to pursue undergraduate studies at Rhodes University in Grahamstown and six years later, emerged from the academic sector with an Applied Psychology Masters Degree from the University of Stellenbosch. The dissertation topic I concerned myself with in my Masters programme was ‘The Psychological Effects of Affirmative Action on The Recipients’.  In my First year of postgraduate studies (Psychology Hons) which I qualified for at the University of Transkei, I looked into ‘The Help-seeking Behaviours of Black South Africans’ as a course of research.

I have worked predominantly in the field of human development, ranging widely from job placement and selection to personal development, dispute resolution and diversity management training. This has largely been in my own business venturing and has been strongly inspired by the belief in people’s ability to grow, to harness the best in themselves and to change.

My energy is also invigorated by the possibility of perpetual learning and as such, I am constantly embarking on new journeys. In the more recent years, I have also found some grounding in my involvement in The Pan African Market project. With a nascent interest in singing and the performing arts, I held down a role in a musical theatre piece which was staged at the Oudtshoorn and Potchefstroom arts festivals. The main attraction in this production for me was the storyline, which teaches, in an easily-received medium, about the powerful diversity born of the similarity and inter-relatedness in the history of the South African cultures. I have also travelled to Korea with a movement and song production initially staged in Cape Town. This production looked at the universal suffering of women through the lens of two post-colonial cultures, the South African and the South Korean. It did so using Sara Baartman’s life as a metaphor for suffering and self-healing, using traditional, spiritual modes of self-regeneration from either culture.

I have also attended the Leadership for Collective Learning Workshop which focuses mainly on dialogue principles and using self as a vehicle for change and growth.

Additionally, as a previous panellist at the then Independent Mediation Services of South Africa and also a current panellist at the Centre for Conflict Resolution, I am often called into various organisations to provide mediation, employee disciplinary and conflict training services.

As an eternal student of life, I hope to stay in the surprise of the various elements on my past, be they biographical, academic, work-related or ostensibly recreational, configuring and reconfiguring to make up the building blocks of what is yet to come. I live in the constant wish of learning with the world and teaching it new ways to dream.